The Owl is sited between two big trees and next to the drive at the front of the Arts Centre.

We have permission to look after the space.

The first task was to clear an area where the sculptor, Tim Burgess, could work on the length of trunk CWAC had given us.  Tim completed the work on October 11th and 12th.

These two big trees make it a shady spot, which will affect our choice of shrubs and flowering plants.  Much of the existing planting can be retained, but in reduced areas as it looks monotonous, comprising Vinca major and Euphorbia.  There is actually a good deal of sun both in the afternoon and early morning and a dappled shade environment will be created which will allow any number of woodland bulbs and flowers.

This opportunity arose following gales last January and February which caused a beech tree near the five-a-side court to fall over.  We spoke with Andy James, the CWAC Park Manager, who kindly responded to our request for a length of the trunk and his contractor kindly moved it to its final location.  At the same time, the Arts Centre received a legacy from the late Mrs Lamming, enabling us to commission the work.

We’re hoping the completed woodland garden will give a warm welcome to all visitors to the Arts Centre and to Castle Park beyond.

The year just ended brought with it many trials and tribulations.  Here is a story from Castle Park in Frodsham that, like the tale of Pandora’s box, offers a single word of solace for the future – Hope.

The winter of 2020 brought much wet and windy weather to Cheshire and in late February a storm brought down a large old Beech tree in Castle Park.  The park maintenance team moved quickly to make the area safe and, as I observed them cutting the trunk into manageable pieces, it occurred to me that one of the lengths might make a great piece of sculpture. Andy James, the Park Manager, agreed and the Contractor was persuaded to drop the piece off near to the Arts Centre with a Hiab lift.

Happily, the Arts Centre had just received a legacy from an old supporter and so, if we could find an artist, we could cover the costs of the work.  The Arts Centre has an extensive network in the Arts world, and we were able to locate a noted chainsaw sculptor, Tim Burgess, who agreed to undertake the task. His suggestion of an Owl met with universal approval.

So far so good, but then came the task of finding the right location for the finished piece and, most importantly as it turned out, moving it there. Rather belatedly, I had made a rough calculation of the weight of the trunk which came to something over 800 kilograms, not the job for a few volunteers with a wheelbarrow!

Andy James and his Contractor came to our rescue again and, despite delays in the availability of heavy lifting equipment over the summer as the Pandemic ran its course, the trunk was finally moved in early August to the woodland garden area being created by the Arts Centre Garden volunteers in front of the Old Smoke House.

Meanwhile the gardening team had created a plinth for the finished piece and commenced the task of planting suitable shrubs to keep it company.  Tim Burgess had been booked for Autumn; the weather was warm and dry, and he completed the piece in a little over a day in early October.  The creative process was great to watch and attracted an appreciative audience both physically and on Facebook.

We also asked Frodsham folk to suggest a name for the Owl via a competition to run alongside the Christmas Festival; the winning name was Phoenix.

The final task was to move Phoenix onto its plinth.  Despite the removal of a good deal of wood from the original trunk to create the sculpture, it was still far too heavy to lift without some serious lifting equipment.  While we waited for this to become available, the volunteers gave Phoenix its first coat of preservative and, thanks to the help of Don Patterson on behalf of Rotary, planted more than 400 purple crocus bulbs around the plinth.  We hope the squirrels leave us some!  The planting will be completed in early Spring.

We had worried about making the final lift onto the plinth but once again assistance came from the Frodsham community; local farmer Andy Worrall kindly obliged with his tractor and a fork lift attachment and, with assistance from the garden volunteers, accomplished the move in early December.  Phoenix is now in position to welcome visitors to Castle Park and the Arts Centre via the Fountain Lane entrance.

None of this would have been accomplished without the support of local groups and volunteers and the Arts Centre wishes to thank everyone who has given their time and advice so generously.  Phoenix and the woodland garden will be routinely maintained to welcome visitors long into the future.

I’m sure there are many such stories about life during the pandemic in 2020 and 2021 that provide hope to us all.  Our last addition to the sculpture will be a plaque to thank all those across the NHS and other services who have worked tirelessly to keep us all going.  At the Arts Centre, “Elevenses in the Courtyard” will continue to provide a safe opportunity for people to enjoy one another’s company.

A happy New Year to you all. 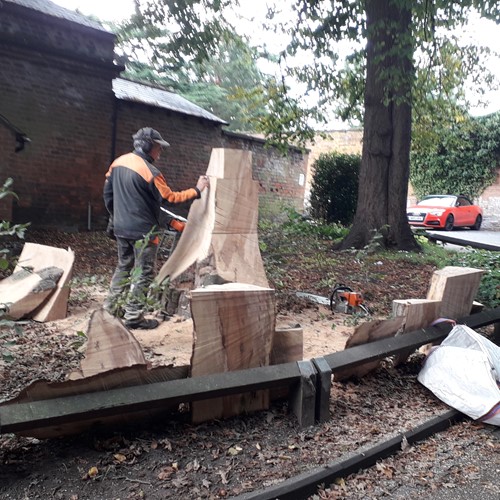 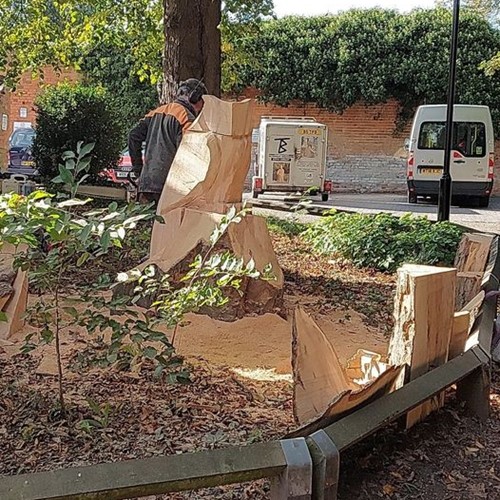 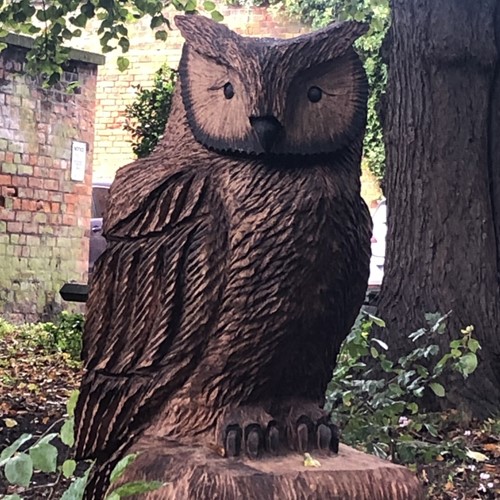 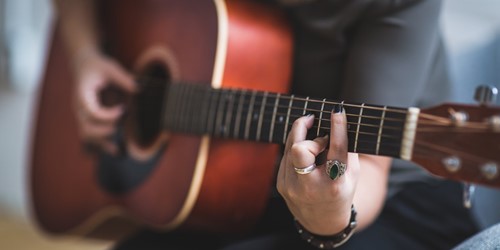